For the sixth year running, teams from Leeds schools were invited to participate in the Tournament run by the 10 Rotary Clubs in the Leeds area. Thirty-Three teams entered.

The event was attended by the Lord Mayor of Leeds, Councillor The Reverend Alan Taylor, who kindly presented the prizes and Rotarian Keith Davison , the District Governor-Elect of Rotary District 1040. 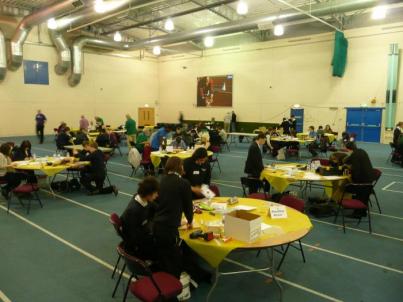 General view of the teams hard at work.

The Trophies for which the Teams compete: 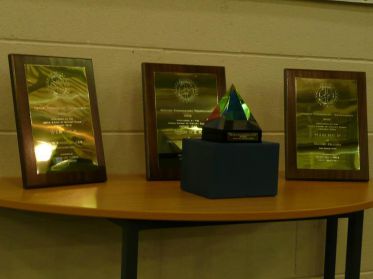 Here are the Winning Teams being presented with their Trophies by the Lord Mayor of Leeds: 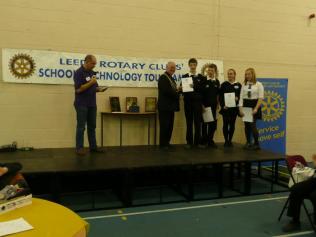 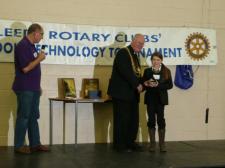 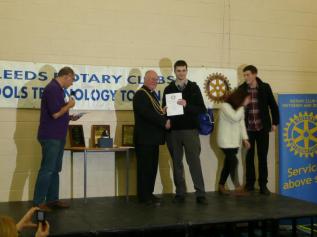 CONGRATULATIONS TO THE WINNERS, AND WELL DONE TO ALL THOSE TAKING PART.

The teams had to tackle a Task, details of which they were unaware until the start of the day at 9.00 am. This Task involved the design, development, building, and testing, of a model and had to be built from limited resources, such as strips of wood, dowel, cardboard, glue, string etc.

The Task was to make a 'coin sorter', capable of sorting 20 coins into their different denominations when the coins were fed, randomly by hand, into the model one at a time - all in the short space of only 2 minutes. The Foundation teams had to sort 1p and 2p coins, while the Intermediate Teams had to separate 5p, 10p and 20p coins into different piles. The Advanced Group teams had to sort 21 coins from all the denominations listed above! The 'Sorter' had to be decorated with a Charity Theme of the Team's choice.

The teams found it a challenge, but good fun, and they were very ingenious with some very different solutions to the problem. Not all of the 'sorters' worked, but everyone enjoyed the challenge.

The teams had to produce a ‘portfolio' documenting their ideas, designs, test results and so on.

The results of the teams' labours were judged in the early afternoon, and then the prizes and certificates presented before the close of the event at 3.00pm. The judges were Rotarians and Industrialists with backgrounds in engineering, technology and education. A testing, but fun experience was enjoyed by all those taking part - including the accompanying teachers, who were also invited to tackle the task, and take part in Continuing Professional Development (CPD) activities.